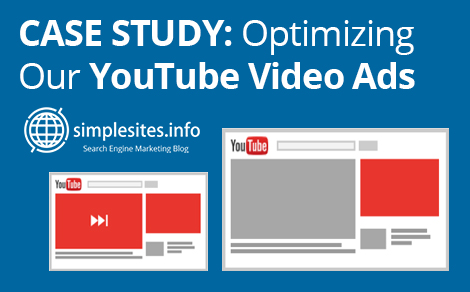 In early 2015, we decided to get into producing YouTube videos. We didn’t do this because we wanted to spend endless time making stupid videos in hopes of “making it big” one day, but producing video complements many of our other marketing efforts. However, for the amount of views we’re getting, we’re making just pennies. We thought we’d do a case study on optimizing our YouTube channels to make the most money from our YouTube video ads.

Yes, one year ago today we invested in quality video gear to produce awesome YouTube videos. While we thought we might do some silly ones, most of them have been high-quality, professional content that focuses on solving real problems that people have. We know that people like watching high-quality, HD videos more than the low-quality, piexelated ones.

Here is the equipment we use to make our professional YouTube videos:

We produce videos that solve real problems, give real advice, produce genuine content, do a little keyword research, stick them up on YouTube, and see what happens!

Making Money From YouTube: How Our Current Channels Are Set Up

The “monetization” setting is deep within many folders on YouTube, and even once you find the checkbox that says “monetize”, you still need to sync it to your AdWords account, which they won’t tell you! They’ll let you think your videos are monetized for months when in reality, they aren’t.

If you haven’t tried to optimize your YouTube channel for profits, then you probably left YouTube with its default settings which is shown below.

When you are in your YouTube creator studio and video manager, it will tell you which videos are producing money but it doesn’t tell you where that money is coming from, as in which ad type.

Here is the ad performance on three different YouTube channels

Pure Living for Life – This is our channel for off-grid homesteading. We are documenting our journey of building an off grid homestead 100% from scratch. This channel has the most potential by far, but it’s so young! I actually think our gross revenue is skewed because we haven’t been paid yet for many of our efforts due the channel being so new…. so I’m not positive if the CPM is accurate or not. It matches the other channels somewhat so I have reason to think that it may be accurate after all.

Bright Mind Marketing – A channel for marketing-related stuff. Some is professional for our business and other videos are just for fun to see if we can make a buck off them. The majority on this channel is coming from a “How to Build a Graphic Design Portfolio” video. I made this video in about 1.5 hours and it has produced over $100 to date – not bad.

Bengal Cat Love – This is a channel for all-things Bengal cats. I produced a bunch of professional videos as a training series for people that are interested in getting a Bengal cat. This was paid content but after that was a complete failure, I stuck it up on YouTube where it ultimately will make me more money.

My hypothesis is that many of our channels are heavy on the display ads which is why we aren’t making much money.

So my end goal is to increase overall channel CPM.

Just to test things out, I’m going to set 100% of our videos to display only skippable video ads, and that’s it!

I didn’t know this until I started this case study, but you can manually ad any ad type to any portion of your video, as many ties as you want! Why didn’t I know this?!

To keep things simple, we’re just going to put one skippable ad in before the video. Our display ads aren’t displaying well anyways.

The other thing we can try is adding a skippable video ad halfway in on some of the larger videos, but that will probably muddy the case study so we’ll stick to one for now and see how things do over the next 30 day measuring period.

It appears that we will need to let this test run for at least 30 days before we compare the differences. We think this will double our overall channel CPM but time will tell!

Stay tuned, and subscribe to our blog to see what the results are! In the meantime, feel free to head over to our list of best SEO tools for use in your marketing and YouTube efforts!

Welcome to our blog!
We’ve had an amazing journey full of twists and surprises, heartache and meltdowns as web designers, SEOs and marketers. Our goal is to share some of the very best things we’ve learned and of course to tell you a few things NOT to do that we've learned the hard way. The only thing we enjoy more than dancing with Google is helping others break through to the next level.