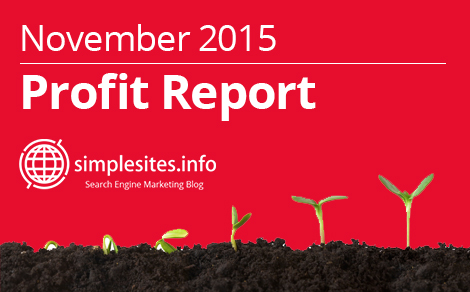 Welcome to our first ever published profit report! We are nearing the end of our first full year of being full-time internet marketers, and thought we’d share monthly updates from here on our. Even though we’ve been full-time internet marketers for the full year, we’ve taken the last six months off to overhaul our life, and November was month 6/6 of our break. That said, here is how things looked in our last month of being “off”.

The total traffic to our website properties were higher this month than the previous ten months – by a long shot! This is for a few different reasons.

Because many of our niche affiliate sites are strictly ecommerce, one being popular in the winter season, traffic always spikes in third quarter, as do our sales! This makes for a great fourth quarter but one of our goals for 2016 is to diversify our affiliate portfolio a little so that we earn continuously throughout the year.

This is how many of our affiliate sites look as we head into fourth quarter.

One of the keywords we worked in early in 2015 was “best _______ reviews”. According to SerpBook, we were ranked 47 going into the year, did A LOT of work on the keyword (hopefully we can share the exact steps we took soon!) then we didn’t touch it. Over the summer it climbed to a consistent #5 ranking and because the product is $2,000+, it doesn’t have a high conversion rate, but traffic is up for the site overall as are sales.

We started working on this blog just three months ago and it’s gone from 2,000 visitors per month to over 30,000. We’re getting 1,000 YouTube followers per month, 300 Facebook followers per month, and 30 subscribers to our email list per day. We’re talking serious traffic. The majority of our affiliate sales surprisingly didn’t come from this blog: we have bigger plans for the blog and will be talking about those strategies as we have time. For now, we are working on growing our following.

We had high hopes and aspirations for the end of 2015 but fell short. We didn’t anticipate having to take six months off from work to do a complete life overhaul, so all work took a back seat, especially our affiliate sites. While we could have had much more traffic for fourth quarter, the face that we have any traffic after a little bit of SEO and six months is great!

One of the many things we were extremely guilty of in the year 2015 was not prioritizing list-building. While we preach to others that “the money is in the list”, we weren’t taking our own advice. We were extremely busy and had too many irons in the fire, but that’s really no excuse. We weren’t collecting emails on many sites, and our email collection system had a very poor conversion rate (like 0.5% or worse).

We did collect a lot of emails on Authority Blog #1 despite having a poor conversion rate. Just think of how many emails we would get with a 3.5% conversion rate!

We have since started a case study on increasing email opt-in rates and have taken one blog from a 0.5% conversion rate to an average of 3.5%!

The good news is that things can only go up from here. List building is just about our #1 priority in 2016!

This was not a bad month for us for affiliate income. Since we took six months off from work and only started working again in the first week of December, it was a great month! Our affiliate sites didn’t let us down, and we had a few other great sales despite not working a single day throughout the month. We have big plans in 2016 to really step up our earnings in residual income.

We only really have Adsense one of our affiliate sites, and the majority of the income was from the second half of the hear – especially fourth quarter.

Our YouTube earnings are growing month-over-month. Most of the profits are coming from videos that took us under an hour to make.

On our new authority blog, YouTube is one of our primary marketing channels and we’re seeing rapid growth. We are excited to see how this converts to money… we think there is a lot of potential in this channel for money-making.

These are watch time and channel stats for November for Authority Blog #1. Here is our case study in how we plan to increase our YouTube earnings.

Because we have taken the last six months off from work, we’ve really not provides many services. We did a little consulting over the summer/fall, but that’s about it. The only income we have under “services” would be high DA link rentals. We have a HUGE PBN, including many high DA sites (DA 30-60+) that we rent links on.

This is something we could promote next year, but right now it’s more of a “word of mouth” type thing.

Here is how one of our customer’s site has improved over the past 6 months. One link helped get the ranking from #8 to #2 (local SEO). This was on a DA 30+ site.

No new blog posts written, but we have LOADS that are being written in December! We’ll share what we have for December so far just for fun.

Considering we’ve not worked on much of anything in the past six months, we think we did pretty darn good! There is lots of room for improvement over the months to come. By looking at the cold hard facts of what our websites and marketing efforts are doing, it makes it a lot more obvious to see where the strongest areas of opportunity are. Bring it on December and 2016!

Welcome to our blog!
We’ve had an amazing journey full of twists and surprises, heartache and meltdowns as web designers, SEOs and marketers. Our goal is to share some of the very best things we’ve learned and of course to tell you a few things NOT to do that we've learned the hard way. The only thing we enjoy more than dancing with Google is helping others break through to the next level.